Tripadvisor for Punta Cana Trips in 2020

TripAdvisor is an American travel site. It gives its users the opportunity to plan a trip to any country in the world. In recent years, it has become one of the most popular resources for travelers by covering almost all countries and cities. It is also popular due to a large number of reviews and real photos taken and uploaded by tourists.

TripAdvisor was founded by Stephen Kaufer, Langley Steinert, Nick Shanny, and Thomas Palka in February 2000. Kaufer said the original idea wasn’t a user generated social media site to swap reviews, “We started as a site where we were focused more on those official words from guidebooks or newspapers or magazines. We also had a button in the very beginning that said, ‘Visitors add your own review’, and boy, did that just take off.” Seed money was obtained from Flagship Ventures, the Bollard Group, and private investors [Source].

TripAdvisor has been the subject of controversy for allowing unsubstantiated anonymous reviews to be posted about any hotel, bed and breakfast, inn, or restaurant. Approximately 30 hotels have been banned from the website by the company for suspicious reviews, including a Cornwall hotel that bribed guests to leave positive reviews of the hotel.

TripAdvisor has stated that reviews are subject to a verification process which considers the IP address and email address of the author, and tries to detect any suspicious patterns or obscene or abusive language. The website also allows the community of users to report suspicious content, which is then assessed by Tripadvisor staff. 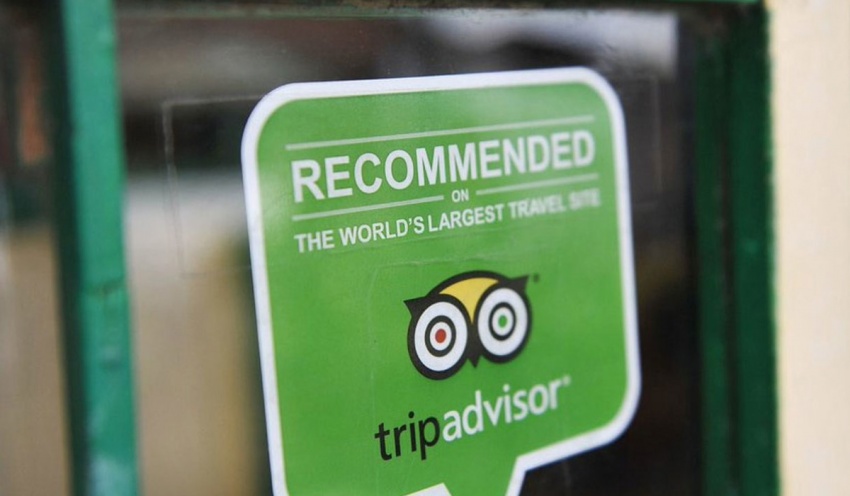 In September 2011, after receiving a complaint submitted by online investigations company KwikChex, the UK Advertising Standards Authority (ASA) launched a formal investigation into TripAdvisor’s claims to provide trustworthy and honest reviews from travelers. The ASA found that TripAdvisor “should not claim or imply that all its reviews were from real travellers, or were honest, real or trusted”, and as a result of the investigation, TripAdvisor was ordered to remove the slogan “reviews you can trust” from its UK web site. It changed its hotel review section slogan to “reviews from our community”. TripAdvisor stated that the branding change had been planned for some time and that changes began in June 2011, before the ASA investigation. ASA commented that “it was concerned that consumers might be fooled by fraudulent posts since the entries could be made without any form of verification,” but recognized that TripAdvisor used “advanced and highly effective fraud systems” in an attempt to identify and remove fake content.

In 2012, an action was brought in a Sheriff Court in Scotland, by Richard Gollin, the owner of a guesthouse in the Outer Hebrides who claimed damages for malicious statements. TripAdvisor asserted that the Scottish courts lacked jurisdiction. The outcome of this case was called a “landmark victory”. TripAdvisor conceded that it could be sued in the UK’s jurisdictions (having previously claimed to be outside the remit of Scots law because it is based in Massachusetts). The court ruled that TripAdvisor’s terms of use constituted a contract, which was actionable/enforceable by the business being reviewed. The case was found to involve issues relating to the Unfair Terms in Consumer Contracts Act of 1977, and these issues were referred to a higher court in Stornoway. The plaintiff eventually dropped the case because he could not afford to pursue it.

In May 2013, a fake restaurant was set up by a disgruntled businessman and reportedly had diners looking for the eatery in an alley filled with garbage cans. The fake listing went undetected on TripAdvisor for about two months.

In August 2013, Kenneth Seaton lost a $10 million lawsuit against the company in which he claimed that the ranking for his Grand Resort Hotel and Convention Center in Pigeon Forge, Tennessee, as “America’s dirtiest hotel” was based on unsubstantiated rumors.

In March 2014, TripAdvisor’s Chinese site came under scrutiny when a user was found to have reviewed 51 Parisian restaurants in one month, while also reviewing 50 hotels in other countries.

In December 2014, the Italian Antitrust Authority fined TripAdvisor €500,000 for improper commercial practices on the TripAdvisor website. The Italian Authority stated that Tripadvisor and its Italian arm should stop publishing misleading information about the sources of the reviews. In June 2015, a fake restaurant created by a newspaper rose to the top of the site’s rankings in Italy.

In March 2015, Dietmar Doering, a German hotelier based in Sri Lanka accused TripAdvisor of hosting malicious reviews of his resort The Cosy Beach in Marawila. He claimed he was compelled to take legal action for the estimated damages of US$500,000.

In October 2015, an ex-hotel manager at Australian property manager Meriton said that guests were offered inducements to change ratings they left on the site. In 2018, Meriton was fined AU$3 million by the Australian Competition and Consumer Commission for misleading consumers.

In November 2017, it was reported that TripAdvisor deleted numerous reviews which contained allegations of serious criminal activity at resorts in Playa del Carmen, Yucatán Peninsula, Mexico. The deleted reviews included those from two women who were raped at the Iberostar Paraiso Maya in separate incidents 2010 and 2015, one of which involved a hotel security guard. The women said they received assurances from hotel staff that they would help out and contact the authorities, but the staff failed to take any follow-up action. The women then posted advisories and warnings on TripAdvisor, but the reviews were deleted. The review of first victim, Kristie Love, was eventually reinstated, but the company claimed that the review of the second victim, Jamie Valeri, was “hearsay” and it was not reinstated. The reports also highlighted at least 12 other such incidents at hotels and resorts across Mexico, including one of a 29-year-old man who was raped by a massage therapist at a resort in the same area, where reviewers had attempted to warn people through reviews on the company’s site about criminal incidents that the resorts and local authorities had failed to pursue any criminal or legal action for, only to have those reviews either taken down or declined for posting by TripAdvisor.

In November 2017, Oobah Butler, a journalist for Vice Media, who had claimed to post positive reviews for restaurants he never visited in exchange for payment, used fake reviews to boost a nonexistent restaurant named The Shed at Dulwich to the top of Tripadvisor rankings for restaurants in London.

In September 2019, consumer organisation Which? said that TripAdvisor was still failing to stop fake reviews. Its survey of nearly 250,000 reviews for the 10 top-ranked hotels in 10 popular tourist destinations around the world found that one in seven had “blatant hallmarks” of fake positive reviews. Tripadvisor responded that “We are committed to ensuring reviews on TripAdvisor offer useful and accurate information, and we are very aggressive in catching fake reviews and pursuing the fraudsters behind them.”

Despite some problems with the review system, this is one of the largest resource that allows you to search and book hotels and flights, as well as provides with lists of restaurants, attractions and accommodation. And what’s more, the site services are completely free for its users! Just enter the name of the place you are looking for and get the most useful information for your trip. The site has a rich functionality, and most importantly – it is very useful. If you are planning your vacation in a tropical paradise such as Punta Cana, just enter in Google search “TripAdvisor Punta Cana” and you find this service where you can: